The FFT-based binaural panner is a small project that I initially released in 2011 as a part of my Master’s thesis project on ‘Realistic mediation of virtual sound sources’. It is a tool for Max that uses the impulse responses from The CIPIC HRTF Database in order to pan an audio source binaurally to a spherical direction.

To my surprise, I can see that it is still being downloaded quite often, and I also sometimes receive questions and feedback from users. So now I decided to update it a bit in order to reflect the changes made to Max since 2011, and in order to refine a couple of things that I now feel should be done a bit differently.

So now you will find the updated version (version 4) on the download page of the FFT-based binaural panner project.

Recently I stumbled upon the project 3D Tune-In which is a big budget EU research project addressing, among other things, hearing loss and how digital games can help in that context. I recommend checking out the project site, where you will also find a link to the free binaural panner VST plugin that was developed as part of the project – even though it might render my binaural panner less relevant. 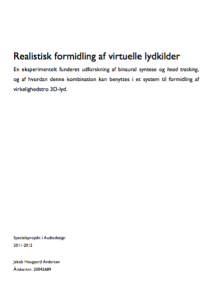